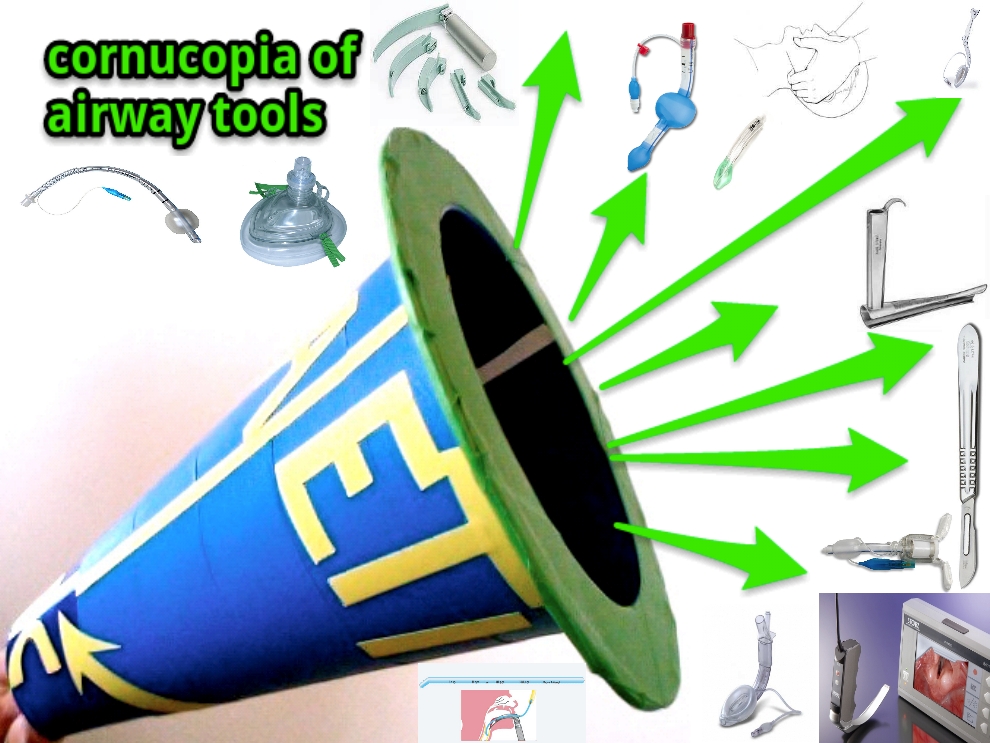 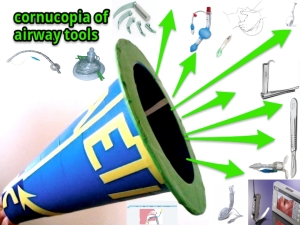 The vortex- approach to the difficult airway is a cognitive aid, illustrated and published by an australian anesthesist named Nicholas Chrimes and his colleague Peter Fritz from Melburne in 2013 (http://www.vortexapproach.com/Vortex_Approach/Vortex.html).

The congeniality of the vortex approach is it’s focus on alveolar oxygen delivery and the imperative progress in airway- management in case of failure. The choise of airway tool is made by the provider, depending on the circumstances and training. You have three attempts for each of three non-surgical airway techniques. These techniques represent the anatomic levels of airway access as extraglottic like face- mask, supraglottic like laryngeal- mask and transglottic like endotracheal intubation. Goal is to provide one “best” attempt. After each attempt is to consider, what to change in the management to succeed. No try should be done without an improvement. If there is no prove of oxygen delivery after these attempts it’s committed to proceed an emergency surgical airway, even if there is no desaturation happened jet. Prove of alveolar oxygenation is done indirectly by confirmation of etCO2. In the vortex this is symbolized by the green border. The blue funnel stands for the apnoeic time when no oxygen flow is established.

The induction of anesthesia is the start of a controlled resuscitation.
In vortex words you jump of the green zone into the blue funnel and the goal is to reach the green zone again, without harming the patient. If you can’t deliver oxygen to the alveoli, you will circle in the blue funnel to the left side or the right side until you drop out of the open end. Then it’s time for a emergency surgical airway.

I like to see the vortex as a cornucopia of airway- tools. In a vortex you can lose control and get disorientated. But as an airway- manager you have to keep the mind of a resuscitationist and you have to control the situation. So you stay better outside of the airway- tornado and grab the right tool for the right moment out of those tools, which are available in your environment (and reach). Some education and training is required to chose the tool wisely. Managing the vortex is not a happy- meal for airway- rookies. The surprise would be unsatisfactory. If you are trained to manage an airway, the idea of the vortex approach opens up your mind. There are no instructions which tool to take. The only rule is to reassess permanently and not to repeat the noneffective procedures.
I love the vortex because of it’s 3D- structured design and logic, with what a very complex procedure is imaged in a very simple manner. I advice to take the vortex as a cornucopia with plenty of airway donations to enrich the professional habit of airway- managers.