Yes you can make it happen: Travel and Emergency Medicine. DEM 2013 at Cuba was such an event I want to talk about. The conference was promoted as “A Conference with a Difference” and really, it was a very special conference.
No advertisement of big Pharma.
No industrial exhibition.
Familiar and relaxing ambiance.
Lectures of heros of emergency medicine.
Intercultural excange with dozens of local cuban doctors.
Caribbean flaire.
All this exellent organized.
For me it started wit a big bang: Welcome drinks at Hotel National de Cuba, I took my Mojito and stand shy at a round table don’t knowing anybody. Then I mentioned the lady in front of mine and read her name: Jeanne Lenzer. “Hello, are you the Jeanne Lenzer, who published “Why we can’t trust clinical guidelines” at BMJ three month ago?” Yes, of course. Incredible. For me it was like meeting Laura Poitras on the streets of Berlin. Next one who I met, was my twitterfriend Amy from Australia. Social Media makes the world go small. I was happy. Further on I got introduced to Jerry Hoffman. As a german anesthesist in emergency medicine, where we don’t have the speciality of EM I didn’t realise at this moment, what was going on. But I enjoied the peaceful, open and friendly spirit of all participants, which continued during the whole conference. Also I learned to know a lot of emergency physicians from Wollongong near Sydney 🙂

We had scientific lectures of Judith Tintinalli, Joe Lex and Hall Haywood which were great. The outstanding lectures were in my opinion the political ones about the cuban medical system and the consequences of the US blockade on Cuba, as well as those about international projects from all over Latin America and Africa.
Did you know, that Cuba had to construct an unterwater- line to Venezuela to get internet access? That no US- products are avilable because of the embargo? That even the Worldbank is not allowed to give credits? And despite this, cubans live longer and the childhood mortality is lower than in the USA. Cuba exports medicine. Most of foreign doctors helping at Haiti are Cuban doctors. More than 30.000 patients from Latin America got operated at their eyes for free at Cuba. Tourist hotels were shut down to host these patients. Medical access is for free for all Cubans.
We learned to know a new structured approach in obstetrics in developing countries as ALSO, which is getting implemented at Mexico. There are projects of the Global Emergency Care Collaborative at Uganda to build up Emergency Medicine. Later on we were invited to look into our inside. What means to be a professional? How much are we influenced by advertisement and little gifts!? Did you know that industry recruits primarily Cheerleaders as pharmaceutic promoters? And everyone thinks oneself is independent in behavior, but others are not. 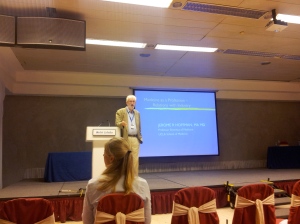 Apart of the conference we enjoied Havana, visiting the Museo de la Revolution, full of devotional objects of the rebells from 1959 like blood soaked shirts and pistols of Fidel and Che. We checked out Daiquiris at Hemingway’s Bar and cuban rum at the Gala Dinner in front of the old Cathedral of old Havana. Not forgetting the incredible taxi-rides in Oldtimers you weren’t allowed to touch in the western world. When the conference was over, I stayed tree more days and did a one-day-trip to Vinales to support the lokal agriculture brigardes testing their tabacco products. Spending some time at Playa del Este was no mistake neither.
Cuba is a poor country but worth while to visit, even if there is no medical event held.

The whole conference was origanised by Mark Newcombe and Lee Fineberg. They did a great job.

So I can strongly recommend to participate for DevelopingEM 2014 going to be held at Salvador de Bahia. http://www.developingem.com/
See you there